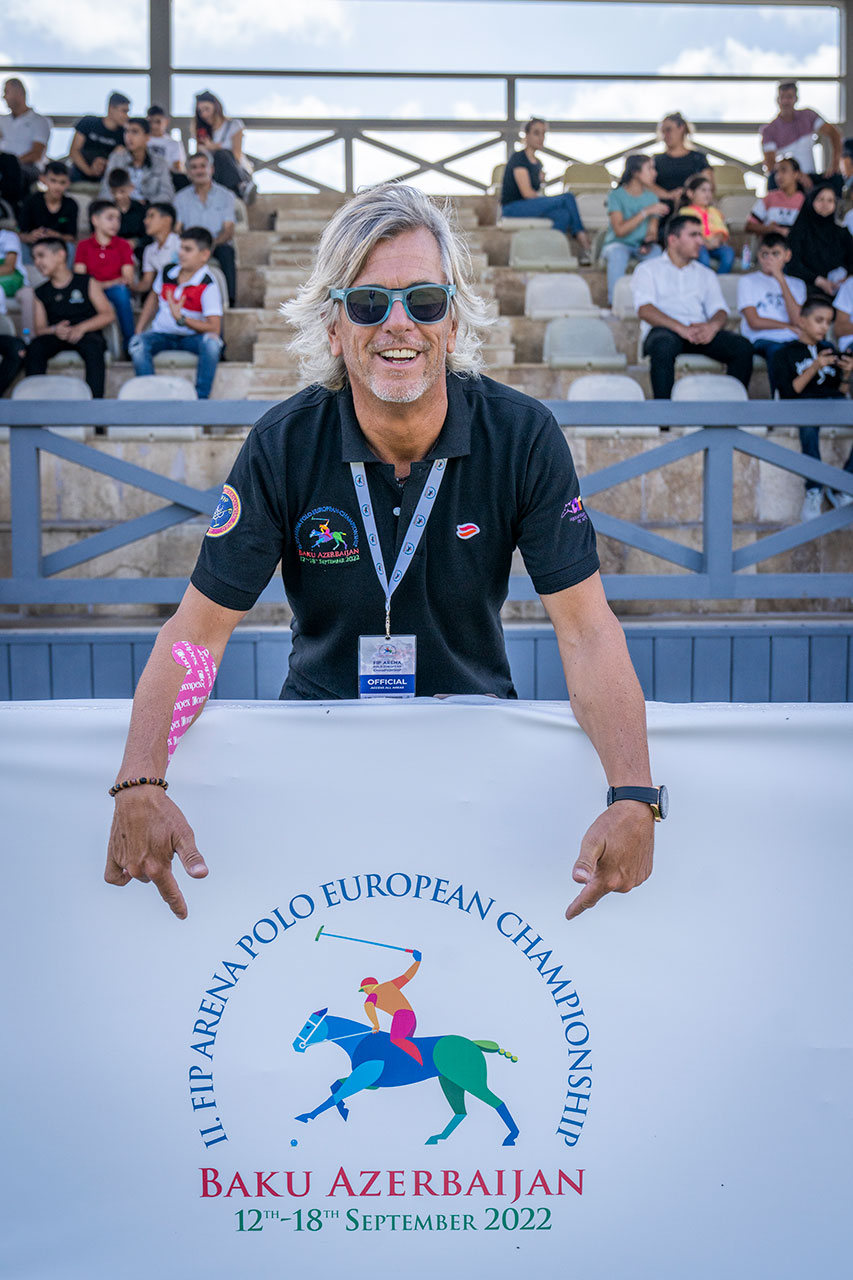 Baku, 18 September 2022. Yesterday, Sunday 18 September, was the culmination of four days of world-class polo in Baku, Azerbaijan. Four teams competed again in the impressive grass arena at The Elite Horse & Polo Club to decide the champions of The II FIP Arena Polo European Championship. Crowds packed into the stands in to enjoy a thrilling Sunday of polo and were not disappointed with the Subsidiary Final played first which was won by the home team Azerbaijan to the delight of the spectators, followed by the Final between Austria and Spain, which saw Austria take the Gold Medal spot.

The local crowds, VIP guests and FIP officials packed out the grandstands surrounding the grass arena as Azerbaijan television streamed the event live. Wildly waving flags, the enthusiastic crowd were out in full force to cheer on their National side in the Subsidiary Final against Switzerland. Tarlan Gurbanaliyev joined forces with Elcin Jamalli for the first time in this tournament; both players were part of the 2015 I FIP Arena Polo European Championship winning team, so the odds were good for the ‘boys in green’ to bag a coveted Bronze Medal place.

Azerbaijan came out of the traps with determination, quickly adding to their half goal advantage with a flamboyant flurry of goals, with just one in response from Switzerland. At half-time, the score was 3½-1 to Azerbaijan, much to the delight of the enthusiastic home supporters. Tomas Ruiz Guinazu worked tirelessly and opened the scoring for the second half with a goal for Switzerland, but Team Azerbaijan replied with a competently executed cluster of goals, with the local supporters roaring their approval. Guinazu scored for Switzerland in the dying seconds of the last chukka, but it was a case of too little, too late and Azerbaijan deservedly won the Subsidiary Final with a decisive 7½-3 score.

The Gold Medal goes to Austria

Next up it was the battle for the Gold and Silver Medal positions between Austria and Spain. The polo cognoscenti in the stands were undecided on who would have the upper hand; as both had been strong in qualification, but the one thing that was not in doubt was that this would be an exciting match
-2-

between two strong teams. The match did not disappoint, with frenetic pace and great end-to-end polo as the evenly-matched sides jostled for dominance of the scoreboard.

It was Austria who got the better start, with two confident goals in the first chukka, but Spain were not taking it lying down, showing strong defence and impressive marking to stop the Austrian goal scoring and get one of their own on the board; so at half-time the scores were close at 2-1 in Austria’s favour – but only just. The fifth chukka was decisive, with Mario Gomez flamboyantly finding the posts for Spain, with one rapidly slotted through in reply by Diego Braun for Austria. Going into the sixth and final chukka it was edge of the seat stuff with the scores at 3-2 to Austria. With the close marking continuing, nobody else added anything else to this tally, with Austria running out the victors and
securing the coveted Gold medal by the narrowest of margins and securing The II FIP Arena Polo European Championship.

The presentation took place with General Javid Abdullayev awarding the prizes and medals. Reto Gaudenzi, Tournament Director of World Polo summed up the sentiments of all attending by thanking the Azerbaijan nation for the superb hospitality and leading the crowd in, “Three cheers for Azerbaijan!”. A fitting end to a great week of competition.

Switzerland for fourth place with prizes from the Dreamland Golf Hotel

Azerbaijan for the Bronze Medal

Spain for the Silver Medal

Austria for the Gold Medal

The photos of the tournament will be filed daily under the following link: https://www.derrotedrache.de/kunden-login/

About polo in Azerbaijan

2013 the unique sport of polo was brought back to Azerbaijan, as one of its origin countries, where the traditional polo version Shovgan was played over the centuries. Thanks to General Elcin Gulijev, President of ARAF, and his visionaries of a new polo era in his country, the modern sport of polo was raised from zero to a remarkable international level in Azerbaijan during the last years. Information about the tournament: https://www.worldpolo.com/event/

Baku, 14 September 2022. Polo in this amazing country has grown exponentially over the past 10 years, thanks to the dedication of The Equestrian Federation of Azerbaijan Republic (ARAF) and the support of World Polo.

On Tuesday 13 September, the teams were presented at The Dreamland Golf Hotel, a 42-bedroom luxury facility overlooking the perfectly manicured 18 Hole Cynthia Dye designed golf course and just a short 20-minute drive to Baku and its World Heritage sites.

Yesterday, on Wednesday 14 September, competition kicked off at the magnificent venue of the indoor covered arena at Elite Horse & Polo Club Baku with action streamed live on Azeri national television. A day of top quality international polo saw the home team of Azerbaijan facing Austria in the opening match of The II FIP Arena Polo European Championship, followed by Spain vs Switzerland in the second match of the day. Before the first match, the players and supporters held a few moments of silence and all present wore black ribbons of remembrance in honour of those lost in the recent border incidents.

As spectators and press from around the world gathered alongside General Elchin Guliyev, President of the Equestrian Federation of Azerbaijan Republic and Dr Piero Dillier, Vice President of FIP, in the viewing gallery, tournament favourites Azerbaijan confidently rode into the impressive arena to take on an Austrian side playing off a two goal handicap advantage. Playing strongly on their home turf Azerbaijan dominated play from the first throw-in and confidently took the lead 3-2 before half time, much to the delight of the home supporters.

Austria effectively locked down Elcin Jamalli at the start of the second half with strong marking and were rewarded with their first field goal of the match, 3-4. As both teams found their stride the competition intensified as a penalty conversion and a field goal both by Jamalli ensured Azerbaijan a convincing 6-3 lead and room to breathe. Austria finished with a lovely goal right on the final bell, but it was too little too late and Azerbaijan deservedly ran out the winners, 6-4.

The second match between Switzerland and Spain was a fast, passionate and frenetic finale to the day, with the heat rising in the arena with every passing minute. Spain began with a one goal advantage which they swiftly built upon, and despite the best efforts of Tito Gaudenzi with a well-guided goal for Switzerland, Spain had the upper hand which saw the half-time score resting at a convincing 5 goals to 2.

Spain started where they left off, with another goal despite the best efforts of the Swiss defence, but the hard work of Gaudenzi, Fabio Meier and Tomas Ruiz Guinazu paid off with back-to-back goals for Switzerland in the third chukka. However, Spain were back in goal-scoring form in the fourth, gaining traction to eventually win the match with a decisive final score of 9-5.

Azerbaijan has started Polo in 2013 with a great International Arena Polo tournament that was
organised every year since (besides due to Covid 2021). In 2015 the first ever FIP European Arena
European Championship was held in Baku with 6 National Teams with great success, Azerbaijan
beating Germany in the Finals.
ARAF has applied to FIP to organize the 2nd FIP European Championship together with World
Polo (our partner since 2012) in September 2022. The response from FIP was very positive!
The infrastructure for Polo in Azerbaijan is very impressive: one Arena Polo Grass field stadium
with 4000 seats, one Arena sand Polo Field stadium with 1500 seats, one indoor sand Arena Polo
field with 1000 seats and one Arena sand training field.
Brand new are our full size grass Polo fields who will be ready end of 2022. In addition we have
300 Stables, Horse Clinic, training facilities, Clubhouse and Event hall at the Elite Horse and Polo
Club in Baku.
The driving force behind this great Polo development is General Elcin Guliyev, the President of
ARAF the Azerbaijan equestrian and Polo Federation. Polo is supported very strongly by the
President of Azerbaijan and the local business community.
In the following pages the concept of the tournament.